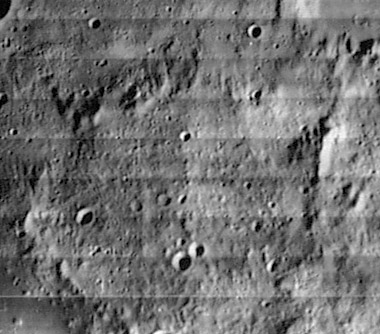 (IAU Directions) BIRMINGHAM.-- A large rhomboidal-shaped enclosure, defined by mountain chains and traversed by a number of very remarkable parallel ridges. It is situated nearly due N. of Plato on the N. edge of the Mare Frigoris, and lies on the S.W. side of W.C. Bond, to which it bears a certain resemblance. This region is characterised by the parallelism displayed by many formations, large and small. It is more apparent hereabouts than in any other part of the moon's visible surface. When favourably placed under a low morning sun, Birmingham is a striking telescopic object.