Balandin - on the floor of Gagarin 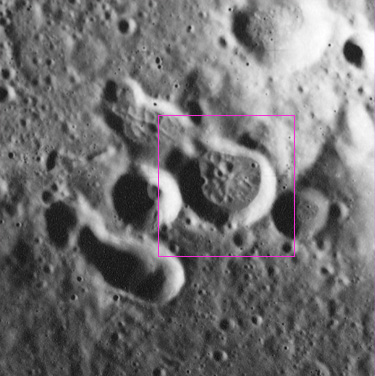 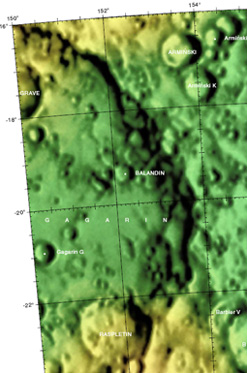 Balandin lies north-easterly on the not-so-leveled floor of Gagarin -- a 265 km diameter-wide crater that formed during the pre-Nectarian period (4.6 to 3.92 bn years). The crater looks, to all intents and purposes, like a capital 'D' that has tipped over on its side. Is this D-like appearance the result of ejecta from another impact event nearby in the region covering over the northern portion of the rim, or, is Balandin the result of an oblique impact? Landfill material seems to have poured in from the odd-looking connecting feature just north-west of Balandin (perhaps, the result of two coalesced craters), and this has covered in over any peaks or clumps of rocks that may originally existed inside the crater. Only a few small craters lie within the 'hummocky-looking' floor of Balandin -- the largest being about 1 and 1/2 metres across, however, there also is a hint of a buried rille that seems to extend into the odd-looking feature already mentioned in the north-west? - JohnMoore2