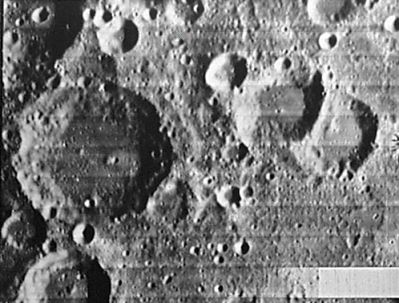 LOIV 095 H1, Baco is on the left, Ideler is the left-hand crater of the pair on the right.

(IAU Directions) BACON.--A very fine ring-plain, 40 miles in diameter, S.E. of Clairaut. At one peak on the W. the terraced wall rises to nearly 14,000 feet above the interior. It is broken on the S. by three or four craters. On the E. there is an irregular inconspicuous enclosure, whose contiguity has apparently modified the shape of the border. There are two large rings on the N. (the more westerly having a central peak), and a third on the W. The floor appears to be devoid of prominent detail.

Roger Bacon (c. 1214–1294), was a British natural philosopher and optician who placed considerable emphasis on empiricism and was one of the earliest European advocates of the modern scientific method. Bacon possessed one of the most commanding intellects of his age, or perhaps of any, and, notwithstanding all the disadvantages and discouragements to which he was subjected, made many discoveries, and came near to many others. His Opus Majus contains treatments of mathematics and optics, alchemy and the manufacture of gunpowder, the positions and sizes of the celestial bodies, and anticipates later inventions such as microscopes, telescopes, spectacles, flying machines, hydraulics and steam ships. He first recognized the visible spectrum in a glass of water, four centuries before Sir Isaac Newton discovered that prisms could disassemble and reassemble white light.