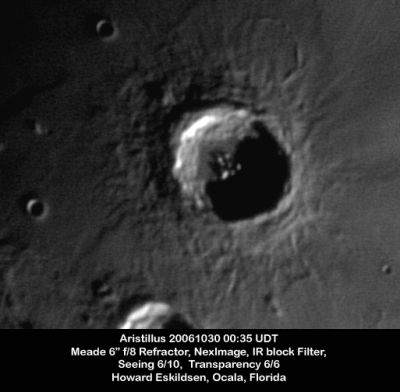 Howard Eskildsen
- The most interesting fact about the pronounced crater Aristillus is the unnamed ghost-crater immediately north of it, interesting because it is a very easy telescopic target during local sunrise or sunset circumstances! Nobody of the I.A.U. (International Astronomical Union) seems to have thought of it to give that easy-to-observe ghost crater an official name or letter designation. Well, I call it the Ghost of Aristillus, or rather the Unsung Ghost of Aristillus. - DannyCaes Feb 19, 2017
- Two dark rays at the inner and outer slopes of the northeastern part of Aristillus, see LROC ACT-REACT Quick Map; shortlink http://bit.ly/2mnNg6K (are these dark rays observable through powerful telescopes?).

(IAU Directions) ARISTILLUS.--A larger and much more elaborate ring-plain, 34 miles in diameter, N. of Autolycus. Its complex wall, with its terraces within, and its buttresses, radiating spurs, and gullies without, forms a grand telescopic object under a low sun on a good night. It rises on the west 11,000 feet above the Mare, and is about 2000 feet lower on the E., while the interior is depressed some 3,000 feet. Its massive central mountain, surmounted by many peaks, occupies a considerable area on the floor, and exhibits a digitated outline at the base. On the S. and E. a number of deep valleys radiate from the foot of the border, some of them extending nearly as far as Autolycus. Shallower but more numerous and regular features of the same class radiate towards the N.W. from the foot of the opposite wall. On the N.E. are several curved ridges, all trending towards Theaetetus. On the S.W. the surface is trenched by a number of crossed gullies, well seen when the W. wall is on the morning terminator. Just beyond the N. glacis is a large irregular dusky enclosure with a central mound, and another smaller low ring adjoining it on the S.W. The visibility of these objects is very ephemeral, as they disappear soon after sunrise. Aristillus is also the centre of a bright ray system.

A Ribbon of Darkness 1.5 Billion Years of History A and A