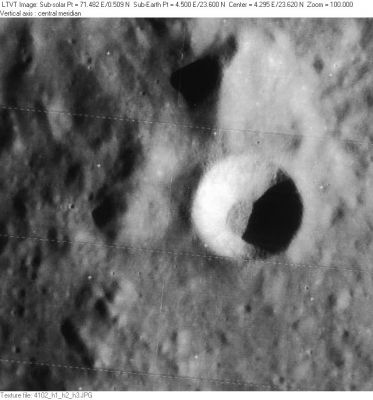 LO-IV-102H The shadow-casting peak to the north is unnamed. It is about 1900 m tall, very similar to the depth of Aratus.

(IAU Directions) ARATUS.--One of the most brilliant objects on the visible surface of the moon, a crater 7 miles in diameter, S. of Mount Hadley, surrounded by the lofty mountain arms and towering heights of the Apennines. A peak close by on the N. is more than 10,000 feet, and another farther removed towards the N.E. is over 14,000 feet in altitude.