From The Moon
Jump to: navigation, search
redirected from 18 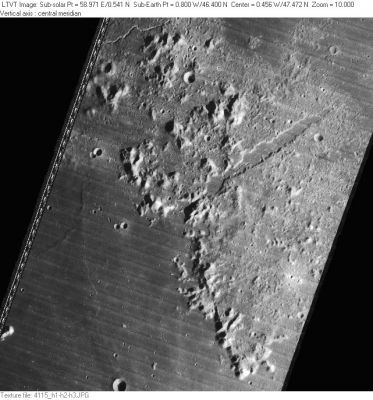 LO-IV-115H This aerial view of the lunar Alps extends from Rimae Plato on the north to Promontorium Agassiz on the south. The Alpine Valley is visible as the swordblade-like rift extending to the upper right. The isolated crater along the lower margin, in Mare Imbrium, is Piazzi Smyth. The sunlight peak on the left, once known as Pico Beta, no longer has an official IAU-approved name.

LPOD Photo Gallery Lunar Orbiter Images
- Spectacular close-up photographs of Montes Alpes (the part east of Plato) were made by Lunar Orbiter 5; Frames 129, 130, 131, and 132. Research Danny Caes.
- Although there seems to be nothing in the LPI's Apollo Images Search for the Montes Alpes and their most southern peaks such as Promontorium Agassiz and Promontorium Deville, there ARE orbital Apollo photographs of those peaks! For example: Fairchild-Metric image AS15-M-1538 which shows these peaks at the centre of the curved horizon! (north of Aristillus). Research Danny Caes.

(IAU Directions) THE ALPS.--include many hundred peaks, among which, Mont Blanc rises to a height of 12,000 feet, and a second, some distance east of Plato, to nearly as great an altitude; while others, ranging from 5,000 to 8,000 feet, are common. They extend in a south-east direction from Plato to the Caucasus, terminating somewhat abruptly, a little east of the central meridian, in about N. lat. 42 deg. One of the most interesting features associated with this range is the so-called great Alpine valley, which cuts through it east of Plato.