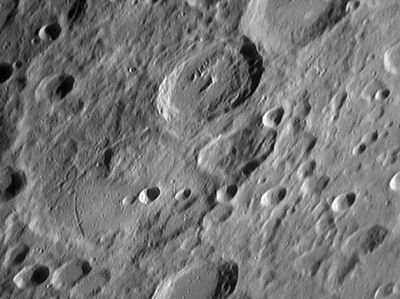 Oliver Pettenpaul, Fabricius is the crater on the northern third of Janssen.

(IAU Directions) FABRICIUS.--A ring-plain, 55 miles in diameter, with a lofty terraced border, rising on the S.E. to a height of nearly 10,000 feet above the interior. It is partially included by the rampart of Janssen, and the great rill-valley on the floor of the latter appears to cut through its S. wall. There is a long central mountain on the floor, with a prominent ridge extending along the W. side of it. E. of Fabricius (between it and the border of Janssen) lies a very irregular enclosure, with three distinct craters within it; and on the W., running from the wall to the W. side of Janssen, is a straight narrow valley. Both Fabricius and Janssen should be viewed under a low morning sun.