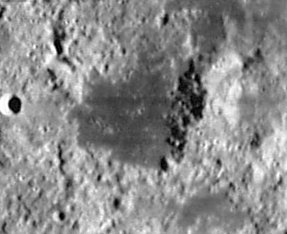 Lunar Orbiter IV 156-H2 submitted by Paolo Amoroso.
Note the pronounced mountain on the eastern part of Zupus's rim. Perhaps we could call it Mount Zupus.

(IAU Directions) ZUPUS.--A formation about 12 miles in diameter with a dark floor, situated in the hilly region N.W. of Mersenius.

The eastern part of Zupus's floor shows some sort of layered appearance. This appearance is only detectable on the WAC - Big Shadows representation in the online LROC Quickmap.