Watt (of the pair Steinheil / Watt) 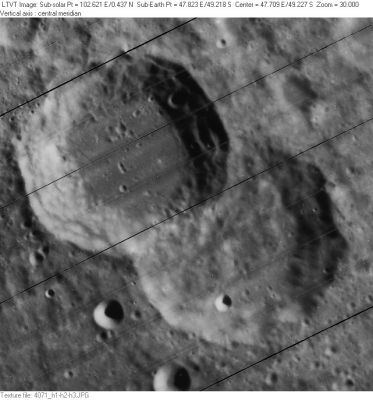 LO-IV-071H Watt is the crater in the lower right, overlain by the similarly-sized Steinheil (to its northwest). The sharp-shadowed 6-km circle of Watt B can be seen on the south floor of Watt, with 10-km Watt A and 12-km Watt B beyond it (outside the rim). In the upper left corner of this view are 17-km Steinheil X and 16-km Steinheil Y (only partially visible).

James Watt (January 19, 1736 – August 19, 1819) was a Scottish inventor and engineer whose improvements to the steam engine were fundamental to the changes wrought by the Industrial Revolution. Watt continued to invent other things before and during his semi-retirement. He invented a new method of measuring distances by telescope.