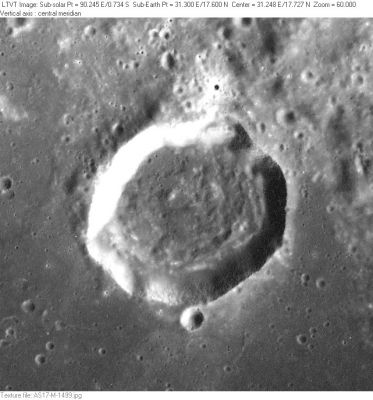 LPOD Photo Gallery Lunar Orbiter Images Apollo Images (see also: Vitruvius, east of)
- Vitruvius was also photographed during the historic first manned mission to the moon in december 1968 (Apollo 8).
See AS08-13-2347 and AS08-13-2350.
On both photographs, the camera was looking northward at the mountainous region around Apollo 17's Taurus-Littrow landing site (december 1972).
Vitruvius itself is the pronounced crater with the shadowed interior and the small craterlet on its southern rim. The wrinkle-ridged region in the foreground is part of Mare Tranquillitatis.
- A shadowless Vitruvius was captured near the right margin of the oblong panoramic ITEK-camera frame AS15-P-9862.
- Research orbital Apollo photographs: Danny Caes

(IAU Directions) VITRUVIUS.--A ring-plain 19 miles in diameter with bright but not very lofty walls, situated among the mountains near the S.E. side of the Mare Serenitatis. It is surrounded by a region remarkable for its great variability in brightness. There is a large bright ring-plain on the E., with a less conspicuous companion on the S. of it.