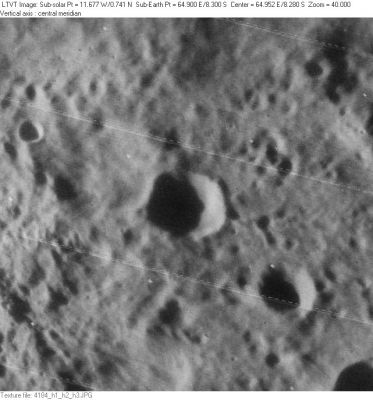 LO-IV-184H Somerville is in the center. The faint 23-km crater touching it on the northwest is Langrenus H with little Langrenus R beyond that. To the southeast of Somerville is 12-km Langrenus N and a tiny glimpse of the shadow-casting rim of Langrenus M in the extreme lower right.

LPOD Photo Gallery Lunar Orbiter Images Apollo Images
- Note: all orbital Apollo photographs of Somerville (Langrenus J) are (or should be) online in the short series Langrenus, east of because Langrenus J's location is a little bit eastward of Langrenus itself.- DannyCaes Jan 23, 2010
- AS15-P-10093, which is the first frame of Apollo 15's REV 63 - VERTICAL (a series of panoramic ITEK-camera frames) shows crater Somerville just off the screen's right margin. To see the crater, one should scroll a little bit to the right (Somerville is the crater with the high-albedo spot at the eastern part of its floor, and dark radial streak at the western part of its inner slopes).
- AS15-P-10088 shows most of Somerville, while AS15-P-10086 only shows its eastern half with the bright spot on its floor.
- Apollo 16's AS16-P-4419 shows Somerville illuminated by high sun. On this frame it is not necessary to scroll to the right because it (Somerville) is already visible at centre of screen.
- Research orbital Apollo photography: Danny Caes