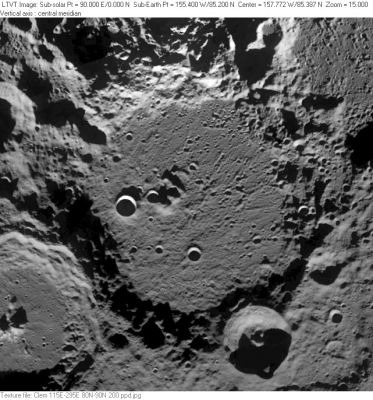 Clementine Rozhdestvenskiy is the large crater in the center of this north-up aerial view. The deep 42-km diameter crater on its southeast rim is Rozhdestvenskiy K, while a little north of that on the rim is 21-km Rozhdestvenskiy H. The 109-km crater half visible in the lower left is Plaskett while the similarly sized, but less obvious, one in the upper right is Hermite. Another named satellite, 44-km Rozhdestvenskiy U, can be seen cut by the left margin (half way between the north rim of Plaskett and the top edge of the frame). The craters on Rozhdestvenskiy's floor are unnamed.

A New View of the Limb
North of the Pole
Ho Hum, Another Earthrise