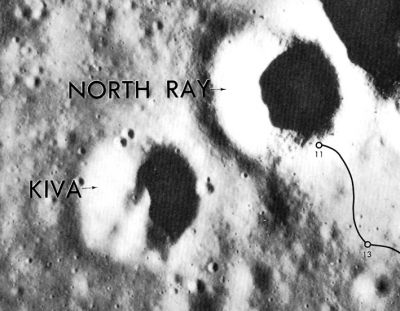 North Ray is one of the high-albedo ray craterlets near Apollo 16's landing site which are already observable through common telescopes. The best time to observe both ray craterlets (North Ray and South Ray) is during Full Moon. It is not known if the much smaller Baby Ray (near South Ray) is also detectable through powerful telescopes. A good specialist of telescopic Hi-Res webcam photography could come up with the answer...

House Rock (the "Big Black Boulder") on the southeastern part of North Ray's rim, visited by John Young and Charlie Duke of Apollo 16.
How old is this crater? (oblique LRO-view of North Ray Crater).

How Young is Young? (North Ray Crater and House Rock).