Note: the lower (and main) part of this page contains all sorts of lists and catalogs related to low-albedo spots or low-albedo regions, for example the dark dish-shaped craters such as Plato, IAU-lettered dark spots and craters, officially unnamed dark regions, unofficially named or nicknamed "dark lakes", and also the ancient lists from Langrenus and Hevelius (their own Lacus regions). 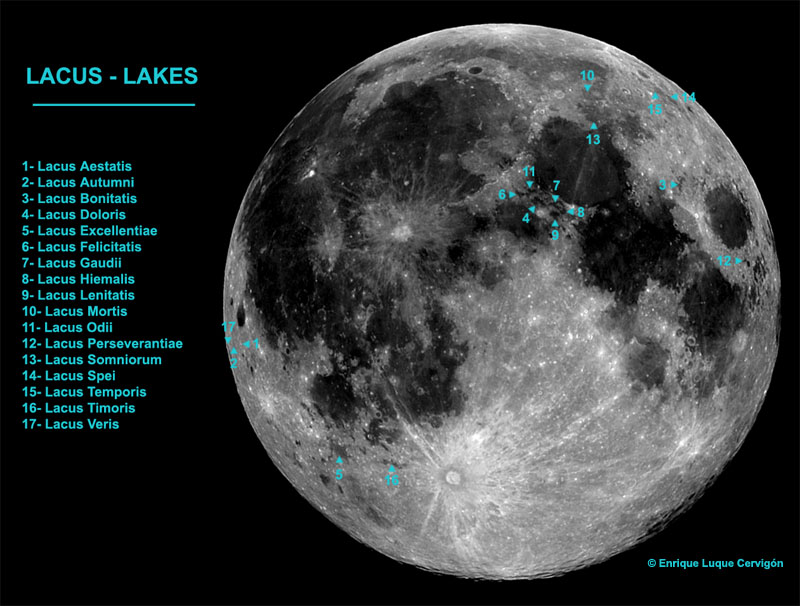 Enrique Luque Cervigón (a labeled view of the nearside's dark Lacus formations, as they appear on the Full Moon).

Nameless dark spots and regions on the moon's near side (not to be confused with dark-halo craterlets)
- The dark region at de Gasparis - Liebig - Palmieri, near Mare Humorum's southwestern rim (seems to have been called Arabiae paludes by Hevelius).
- The elongated dark region south of Piazzi B and several attached dark regions northwest, west, and southwest of Piazzi C
- The dark spot on the floor of Schluter, once called Mare Hiemis by Franz (Schluter is the crater once named Malvasia by Schroter).
- The tiny dark spot at 2°50' South/ 81°20' West, northeast of Schluter (see LAC 73 in the Clementine Atlas of the Moon).
- The dark spot immediately west of Fourier A (which is more-or-less the centre of the semi-circle shaped arc of dark spots southwest of Mare Humorum).
- The elongated dark spot south of De Gasparis A
- Several dark spots east of Lagrange Y
- The dark lake south of Vitello. It should be noted that, in this lake, near craterlet Vitello R, a small section of an officially unnamed lobate scarp was transformed into a short wrinkle ridge. It's interesting to try to locate the beginning (start) and end (finish) of this lobate scarp! I don't know if I'm the first one who noticed this remarkable feature (?). I would like to know if there's a map of this region, with the pinpoint locations of the entire scarp. - DannyCaes Dec 17, 2015
- The two dark craters near the northern eye of the Smiling Cat (Lacus Risus Felis).
- The dark dish shaped crater northwest of Bartels A.
- The dark spot southwest of Neper D.
- The dark spot west-northwest of Macrobius V.