Lindsay - and Barcroft (Dollond B) southeast of it 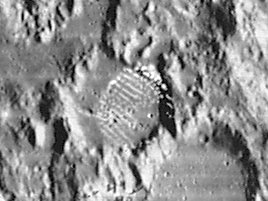 Lunar Orbiter IV 089 H3
Lindsay (Dollond C) at center of the image (with several odd white blemishes from the photographic unit aboard Lunar Orbiter IV) and larger Barcroft (Dollond B) southeast of it. Barcroft was one of the discontinued names from H.P.Wilkins and P.Moore (see their book The Moon).

Ruins of a very ancient large crater west of Lindsay