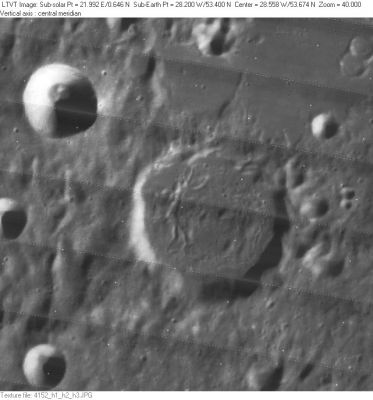 LO-IV-152H Many of the smaller craters in this field are named as satellite features of La Condamine. The largest is 18-km La Condamine D in the upper left.

(IAU Directions) CONDAMINE.--A rhomboidal-shaped ring-plain, about 23 miles in diameter, N. of Maupertuis, with lofty walls, especially on the W., where they rise some 4,000 feet above the interior. There are three large depressions on the outer N.E. slope, and at least three minute craters on the crest of the wall just above. Though neither Neison nor Schmidt draw any detail thereon, there is a prominent ridge on the N. side of the floor, and a low circular hill on the S. On the S.W. four long ridges or spurs radiate from the wall, and on the N.W. are three remarkable square-shaped enclosures. On the edge of the Mare Frigoris, N.E. of Condamine, are many little craters with bright rims and a distinct short cleft, running parallel to the coast-line. The winding valleys in the region bordering the Sinus Iridum, and other curious details, render this portion of the moon's surface almost unique.