FLY ME TO THE MOON 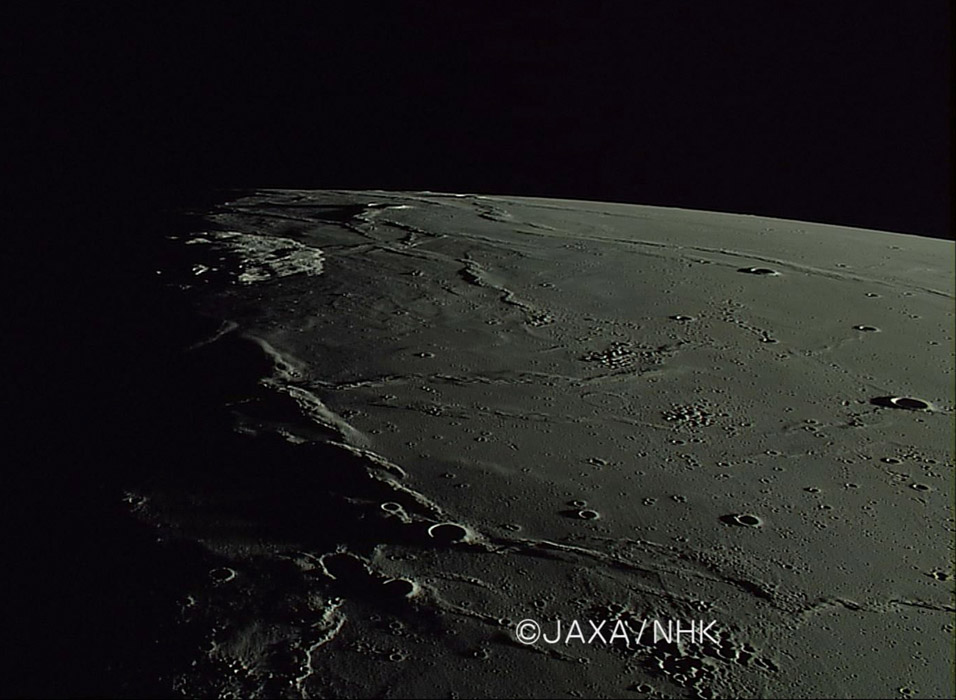 A large HD TV monitor mounted in the lobby of the Lunar and Planetary Science Conference was often surrounded by a cluster of scientists with smiles of joy and amazement on their faces. I stood next to Paul Spudis and Bill McKinnon for nearly 20 minutes watching a succession of one minute videos. Each showed a pass over the Moon by the HDTV camera on the Japanese Kaguya spacecraft. We grinned as we recognized fabled features such as King crater, the Cordillera Mountains, and the Aristarchus Plateau that previously we only saw from an orbital perspective in our dreams. The HDTV camera is not one of the scientific instruments but rather is for public outreach. It will be spectacular for that, providing viewers the sensation of being in low orbit around the Moon. But it is also a bonanza for scientists who want to understand the topographic context for features they study. Almost always we look at an image made with a camera pointing straight down, giving a geometrically undistorted plan view of the surface. This is excellent for many purposes but is essentially a flat view, like looking at a map. With the Kaguya HDTV every feature is seen with a strongly oblique view, revealing topographic realities that often explain why a crater has an asymmetrical shape - its on a slope - or why a lobe of Orientale ejecta turns - it swirled around an obstacle. And the motion of an object first seen on the horizon and then becoming larger as the spacecraft flies towards it gives a feeling for the regional context too. By the end of the mission nearly the entire lunar surface will be covered by these video swaths, perhaps under different angles of illumination. I can imagine a video jukebox where you assemble the tour of your choice and then sit back and watch the Moon sweep under you, with Fly Me to the Moon pumping out of the speakers.

Technical Details
Do you recognize the Rümker mound on the terminator? The view is from the south. Notice the roughness of the mare surface to the south of Rümker - is this a part of the dome complex that has been covered by mare lava?

Welcome back! I corrected(?) the link to the Kaguya Image Gallery (which no longer seems to want the "index_e.htm" part at the end) as well as the "click here" comment link (which wasn't working).

I don't know if it's just me, but I'd sure enjoy the Kaguya webpages much more if they were implemented in a straightforward way without the whiz-bang of Abode Flash. I like the sliding Japanese screens, and it's probably best not to look a gift horse in the mouth; but as it is, it appears one can link to the present image, or to the little labeled version of it, but its impossible (as far as I know) to tell anyone how to find both in context. And as the Gallery grows, it looks like one is going to have to do an awful lot of clicking of the Flash "Next" and "Previous" buttons to navigate through what could be a simple text list of available image pages. Also, in the present labeled versions with text explanation (where it says "Coming soon" in this case), the Kaguya web designer seems to feel it is artistic to tell my browser to turn off the scroll bars, making it impossible for me to read all the text. Likewise, the many movie clips seem to be available only in some kind of internet "streaming" mode, which although I can view them, I (at least) don't know how to download for off-line study.

On a more technical note, I wonder if anyone at the LPSC asked a Kaguya scientist if they could take (or had taken) a laboratory test frame of a similar contrast target with a similar model HDTV camera to see if there is something in the system (or processing) that would account for the thin bright line so often seen at the limb. In the present case, even the Apollo film image shows something similar along the limb it's viewing. But perhaps it's too embarrassing to admit either the Moon might really look like that or that Kaguya might be showing it incorrectly.

(2) Thanks, Jim, for fixing the link and helping folks submit LPODs last week!
I agree about the ackwardness of using the Photo Gallery pages, they are beautiful but not very efficient.
I notice that the videos seem to be slightly over-enhanced, too much contrast - this might contribute to the brightness along the horizon. I saw some enlarged prints of a few HDTV frames in Houston and they had perfect tonal quality and no bright edge.
Chuck