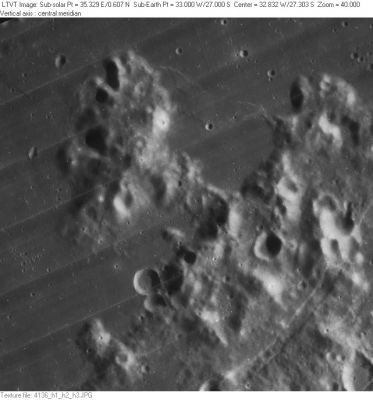 LO-IV-136H Promontorium Kelvin is the island in the upper left. Rupes Kelvin is the diagonal scarp below it, and (parallel to that) the rille in the lower right is part of Rimae Hippalus.

William Thomson, Lord Kelvin (June 26, 1824 – December 17, 1907) was an Irish mathematical physicist, engineer, and outstanding leader in the physical sciences of the 19th century. He did important work in the mathematical analysis of electricity and thermodynamics, and did much to unify the emerging discipline of physics in its modern form. He is widely known for developing the Kelvin scale of absolute temperature measurement. He also had a second career as a telegraph engineer and inventor, a career that propelled him into the public eye and ensured his wealth, fame and honour.