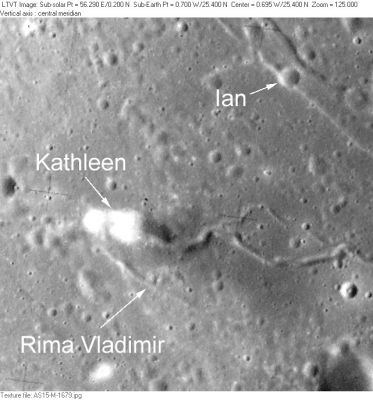 AS15-M-1679 IAU-approved feature names in this detail from an Apollo Metric Camera frame include Kathleen, Ian and Rima Vladimir. For named features in the area adjoining this on the right see Ann.

LPOD Photo Gallery Lunar Orbiter Images Apollo Images
A wonderful telescopic photograph which was made by the dedicated lunar observer Bob Pilz shows Kathleen in the very centre of it. The somewhat curved chain of mountains (running diagonally over the lower left part of the photograph) is Montes Apenninus. North is to the right. Research: Danny Caes