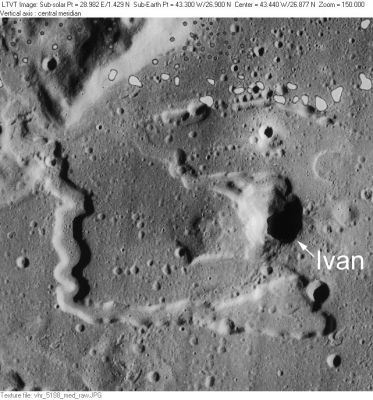 LO-V-188M Ivan is about 20-km NNE of Vera, another pit in the Rimae Prinz area. Its connection to a particular major rille is much less apparent than for Vera.
WARNING: the odd grey spots in the upper half of the top image are not true topographical formations, they were created on the photographic film aboard L.O.5. (Lunar Orbiter 5). These spots are NOT related to the Irregular Mare Patches (IMPs) described below.- DannyCaes Oct 21, 2014