index at bottom of page 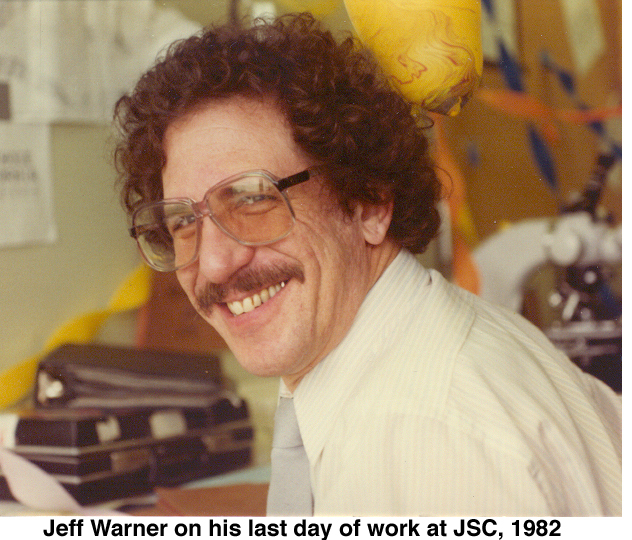 If you visited Jeff Warner's office at Johnson Space Center during the 1970s and early 80s, Jeff probably picked up a Polaroid camera and took a picture of you. That collection has survived and is presented here in 208 photos of scientists, grad students and administrators, almost all of whom were involved with the Moon in some way. Most of the pictures were taken in his office or occasionally in the hallway or a lab, all in Building 31, the JSC building that housed the lunar samples and the people who studied them. During the 1980s I was in the office next to Jeff, and in the late 1990s I contacted him for copies of his images to place on a web site. It has taken nearly a decade, but here they are. I hope the pictures (and text that readers are encouraged to contribute) will be fun for old timers - everyone included in the photos - and informative for historians of lunar science.

Although Jeff has provided names for all of these people, it would be fascinating to know what they did, and where they are now. It is easy to add a new page for each person - I've done a few as samples - so I invite the people themselves, and others who know them, to add their most important work, major publications, anecdotes and other information. It is necessary to register first - just create an account and after I approve it, you can come back to the wiki and tell the rest of us all about these folks, including yourself! Enjoy the memories, all thanks to Jeff!


There are 35 pages, each with photos of 6 or more people. In general, they are in alphabetic order. Enjoy!
(Remember, you can add a comment for any person or photo - just click "Edit this page".)