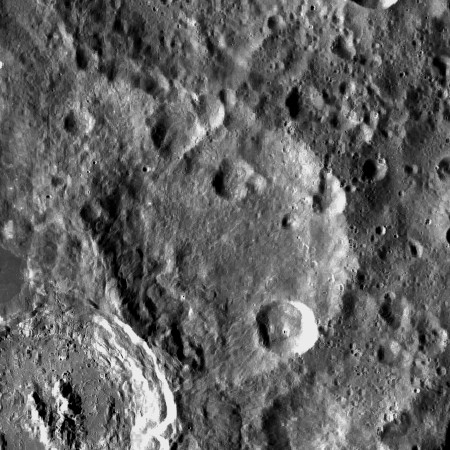 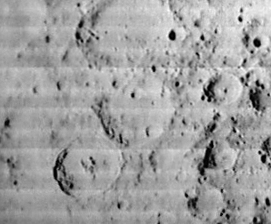 left: LROC . Unmistakable King crater and lava pool at lower left of Ibn Firnas
right: LO-I 136 M Ibn Firnas is in the center of this Lunar Orbiter view. The smaller crater to its lower left (with the central peaks) is King. The larger crater above Ibn Firnas is Ostwald with the small, but deeply shadowed, Recht on its east rim. There are a number of IAU named minor features between Ibn Firnas and Ostwald (see Melissa), as well as on the floor of King (see Mons Dieter). Another IAU-named feature in the present view is Zanstra at the bottom of the chain of similarly-sized circular craters on the right (Zanstra is the one with the prominent little crater straddling its northwest rim).

LPOD Photo Gallery Lunar Orbiter Images Apollo Images
The LPI's search-program for orbital Apollo photographs has no match for crater Ibn Firnas, which is rather strange because Ibn Firnas was frequently photographed during the mission of Apollo 16.
- A16's orbital Fairchild Mapping/Metric frame AS16-M-0753 (oblique northward looking REV 27) shows the large crater Ibn Firnas a little below and to the left of the frame's centre.
- On Fairchild frame AS16-M-1317 (oblique northward looking REV 37) it (Ibn Firnas) is partially obscured by the frame's left margin. At the time of REV 37, the command module of A16 was orbiting a bit more northward than during REV 27.
- Ibn Firnas was also captured on A16's panoramic ITEK-camera magazine REV 47 (Forward Facing Camera); frames AS16-P-4988, 4990, 4992, 4994, 4996.
- Research orbital Apollo 16 photography: Danny Caes

Ibn Firnas E (the crater with central peak east-northeast of Ibn Firnas itself which is the northern one of the "chain" depicted and described in the LO-I 136 M photograph at top of this page):
- This crater was captured on Apollo 10's orbital Hasselblad frames AS10-30-4343, 4344, 4345, and 4346 (note: the bright crater in the distance, near the left margin of each frame, is crater Recht).
Research: Danny Caes