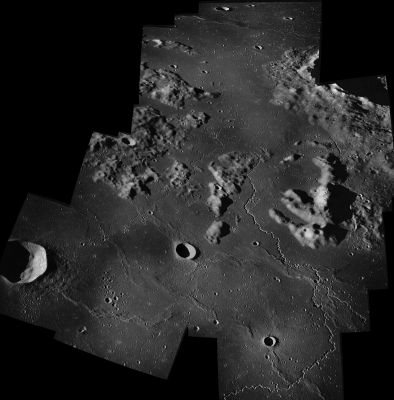 Apollo 16
South Up view of the Herigonius - Andreus Hills region, with Herigonius itself at left, and the Andreus Hills south of it. At right the odd formation Lobster (or Trilobite), thus nicknamed by Akkana Peck (from the online Shallow Sky project and The Hitchhiker's Guide to the Moon).

(IAU Directions) HERIGONIUS.--A ring-plain, about 7 miles in diameter, in the Mare Procellarum, N.E. of Gassendi. There is a small crater a few miles S.W. of it, among the bright little mountains which flank this formation. Herigonius has a small central mountain, which is a good test for moderate apertures.

A ridge, a rille?

Making Rilles Visible.
Features of interest in a small area (the arc-shaped Herigonius Upsilon hillock (or Herigonius Nu?) north-northeast of Herigonius itself).