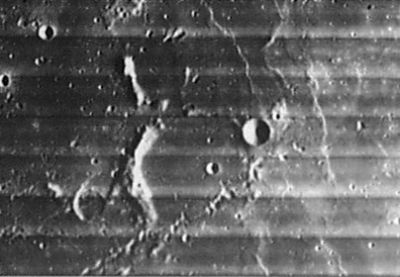 LPOD Photo Gallery Lunar Orbiter Images Apollo Images
- Although the name Gould is not mentioned in the LPI's search-list of orbital Apollo photographs (except the adjacent crater Gould M), it (Gould itself) WAS photographed during the mission of Apollo 16 in april 1972. Gould is noticeable just "above" (north of) the formation Wolf and the central and lowest part of the curved horizon in the oblique south-looking metric/mapping Fairchild-camera photograph AS16-M-2489 (zoom-able HiRes scan of the ASU's Apollo Image Archive).
Research Apollo 16 photograph: Danny Caes
- Note the curious blue color of the bowl-shaped crater Gould P on telescopic color photographs of the Gould region, such as the one of Michael Hunnekuhl, in the LPOD Spotted Moon.

Benjamin Apthorp Gould (September 27, 1824 – November 26, 1896) was an American astronomer. He started the Astronomical Journal in 1849 and in 1859 published a discussion of the places and proper motions of circumpolar stars to be used as standards by the United States Coast Survey. In 1861 he undertook the enormous task of preparing for publication the records of astronomical observations made at the U.S. Naval Observatory since 1850. 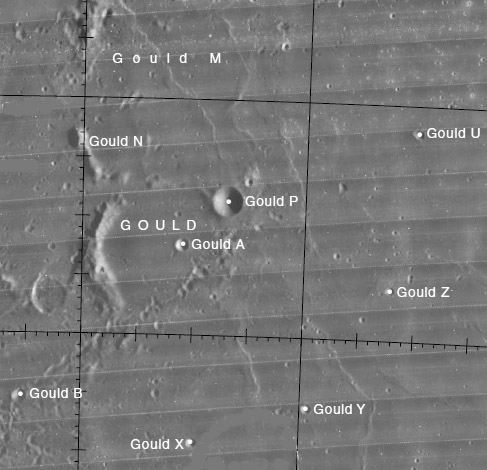