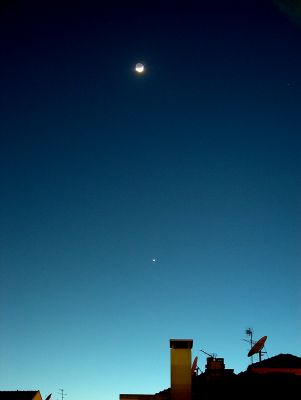 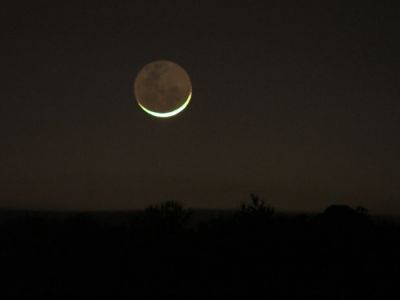 Miguel Claro, The crescent Moon and its dark side. Right: Rob Kaufman, Earthshine on the waning crescent moon.

Caution:
The visibility of a bright lunar crescent with Earthshine at the moon's nocturnal part is NOT the same as a partial lunar eclipse!

Bailly and the Dorfels (an interesting Earthshine-related observation by Harold Hill)
In Harold Hill's splendid book A Portfolio of Lunar Drawings there's an interesting telescopic observation of a shadowed (yet dimly illuminated) mountain range at the moon's south-southwestern limb, a mountain range which was once called Montes Doerfel (or Dorfel). On page 131 of that book, Mr.Hill added a drawing of what he observed during the nocturnal morning hours of september the 27th, 1951. It shows the Dorfel range with five sunlit peaks, and the lower part of the Dorfel's mass in a dim light, of which Mr.Hill thought it could have been Earthshine (at that day in 1951, the moon was at its Waning Crescent phase, and, as seen from the moon, the Earth should have been at Waxing Gibbous).
Now, could it (this weak illumination) have been a combination of Earthshine and reflected light of nearby sunlit slopes slightly east of the Dorfel range?
Research Danny Caes.

Transit of the moon across the bright globular star cluster Messier 22 in Sagittarius
Question:
Are there observations and photographs of the moon's nocturnal part (First Quarter Moon/ Last Quarter Moon) made during the occultation of the thousands of stars in the core of the globular star cluster Messier 22? (the only bright globular cluster which is located slightly south of the ecliptic, on the moon's path).
- DannyCaes May 17, 2015