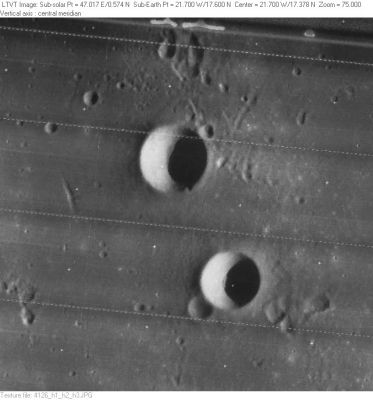 LO-IV-126H Draper is the upper of the two craters, with 8-km Draper C below it.

LPOD Photo Gallery Lunar Orbiter Images Apollo Images
- Although not mentioned in the LPI's Apollo Image Atlas, the Fairchild metric-mapping camera of Apollo 17 made interesting photographs of the Draper pair too. These frames are detectable in REV 65, of which frame AS17-M-2444 shows both Draper and Draper C to the left of the frame's centre (the camera was looking southward, toward Copernicus near the horizon).
- Two of Apollo 17's orbital Hasselblad camera photographs also captured the Draper pair: frames AS17-139-21289 and 21290.
- Additional research orbital Apollo 17 photography: Danny Caes

Henry Draper in the Sourcebook Project: