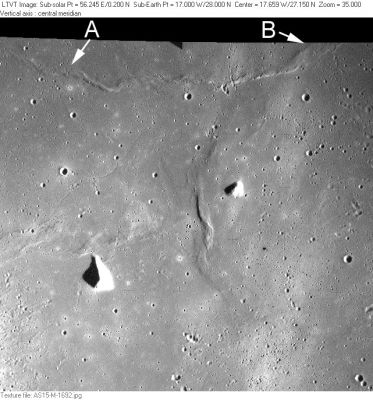 AS15_M-1692 According to the labeling on LTO-40B4, Dorsum Higazy appears to be the ridge extending from “A” to “B”, a distance of about 66 km. The ridges below it (closer to the center of the frame) are parts of a separately-named ridge system (Dorsa Stille).
Although the two depicted peaks (hillocks) are not named in the IAU system, in certain lunar atlases they seem to have been called Lambert Gamma and Lambert Delta (Lambert Gamma is the "nose"-shaped one at left, Lambert Delta is the small one at right). One might consider these two hillocks as the "guards" of Dorsum Higazy.