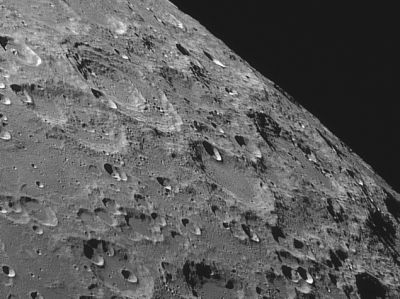 LPOD Photo Gallery Lunar Orbiter Images Apollo Images
- Demonax as seen by a Hasselblad camera of Apollo 15, and captured on color film: AS15-96-13093. In this photograph, the location of Demonax is near the frame's lower left corner. See also the Hi-Res scan: AS15-96-13093 HR.
- Is Demonax the most southern lunar crater captured on color photographs made during the Apollo project? This question could ignite an interesting investigation! (searching the most southern IAU-named lunar formation once captured on Apollo's color photographs).
- Although it is not mentioned in the LPI's search-list of orbital Apollo photographs, Demonax was frequently photographed during the mission of Apollo 15, such as (near the upper margin of) B-and-W frame AS15-95-12988.
- Research and detection of Demonax on Apollo 15 photography: Danny Caes.

Mountains Near the South Pole.