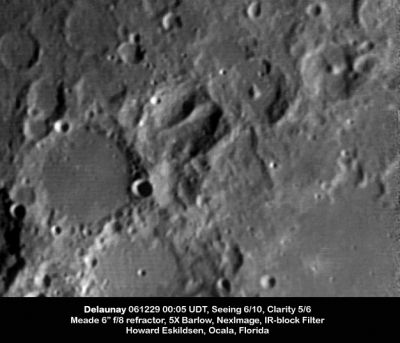 LPOD Photo Gallery Lunar Orbiter Images Apollo Images
- Although not mentioned in the LPI's search list for Delaunay-related Apollo photographs, it (the odd-shaped formation Delaunay) WAS captured on several of Apollo 16's orbital frames! Delaunay is noticeable in A16's Fairchild-mapping/metric magazines REV 26 and REV 48 (oblique south-looking photographs), such as frame AS16-M-0709, in which Delaunay's location is very near the central part of the curved horizon.
- Research: Danny Caes.

(IAU Directions) DELAUNAY.--Adjoins Faye on the S.W., and is a larger and more complex object, of irregular form, with very lofty peaks on its border. A prominent ridge of great height traverses the formation from N. to S., abutting on the E. border of Lacaille. Delaunay is the last link in the chain commencing with Argelander.

Charles-Eugène Delaunay (April 9, 1816 – August 5, 1872) was a French astronomer and mathematician. He worked on the mechanics of the Moon as a special case of the three-body problem. His infinite series expression for finding the position of the Moon converged too slowly to be of practical use but was a catalyst in the development of functional analysis.