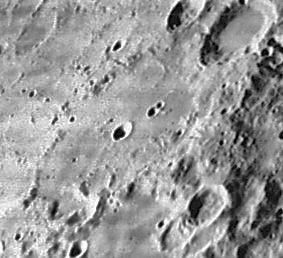 (IAU Directions) DE LA RUE.--Notwithstanding its great extent, this formation hardly deserves a distinctive name, as from the lowness of its border it is scarcely traceable in its entirety except under very oblique light. Schmidt, nevertheless, draws it with very definite walls, and shows several ridges and small rings in the interior. Among these objects, a little W. of the centre, there is a prominent peak.

An ancient large crater between De La Rue and Endymion?