Borel (in the southeastern part of Mare Serenitatis) 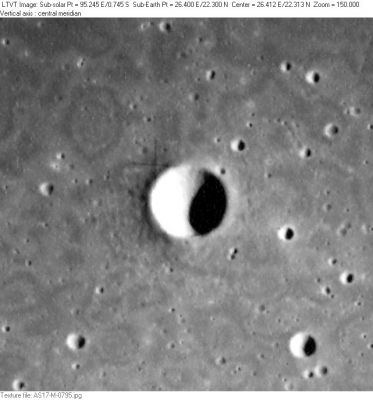 AS17-M-0795 Regarding the background mottles: a similar pattern appears on all the Apollo 17 Metric images of this region, but the details of the reticulation are different on every frame. The pattern is listed as a photographic defect on LTO-42C2 (see annotation in lower right corner).

LPOD Photo Gallery Lunar Orbiter Images Apollo Images
- The bowl-shaped crater Borel was also captured on Apollo 15's orbital ITEK-panoramic frame AS15-P-9304 and its stereo-companion 9309. Borel is the largest one of the depicted craters.
- Post sunrise views of Borel were captured on Apollo 17's ITEK frames AS17-P-2319 and AS17-P-2326. On both frames, scroll to the right until you see the largest one of the small craters: that's Borel.
Additional research orbital Apollo 15 and Apollo 17 photography: Danny Caes