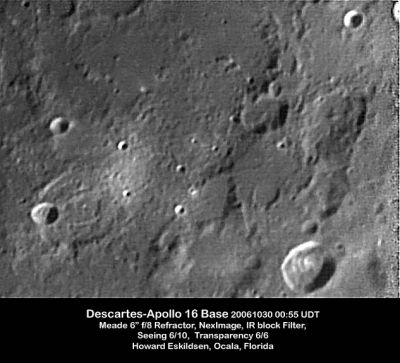 Howard Eskildsen; Descartes is the crater at lower left with a bright crater on its rim.

LPOD Photo Gallery Lunar Orbiter Images Apollo Images Wes Higgins Lunar Image of the Week 04/14/2009
WARNING: the name Descartes is mentioned on many orbital frames of Apollo 12's three stereo-strips 56-B, 56-C, and 56-D. In fact, most of these frames don't show Descartes at all! All the frames of these three stereo-strips show the same caption: DESCARTES - LALANDE - MCCLURE - THEOPHILUS (which seem to have been four of the most important "landmarks" on these stereo-strips).- DannyCaes Aug 15, 2010

(IAU Directions) DESCARTES.--This object, about 30 miles in diameter, situated N.E. of Abulfeda, is bounded by ill-defined, broken, and comparatively low walls; interrupted on the S.W. by a fine crater, Descartes A, and on the S.E. by another, smaller. There is also a brilliant crater outside on the N.E. Schmidt shows a crater-row on the floor, which I have seen as a cleft.

Ruins of a very ancient large crater north of Descartes

Still Mysterious After All These Years