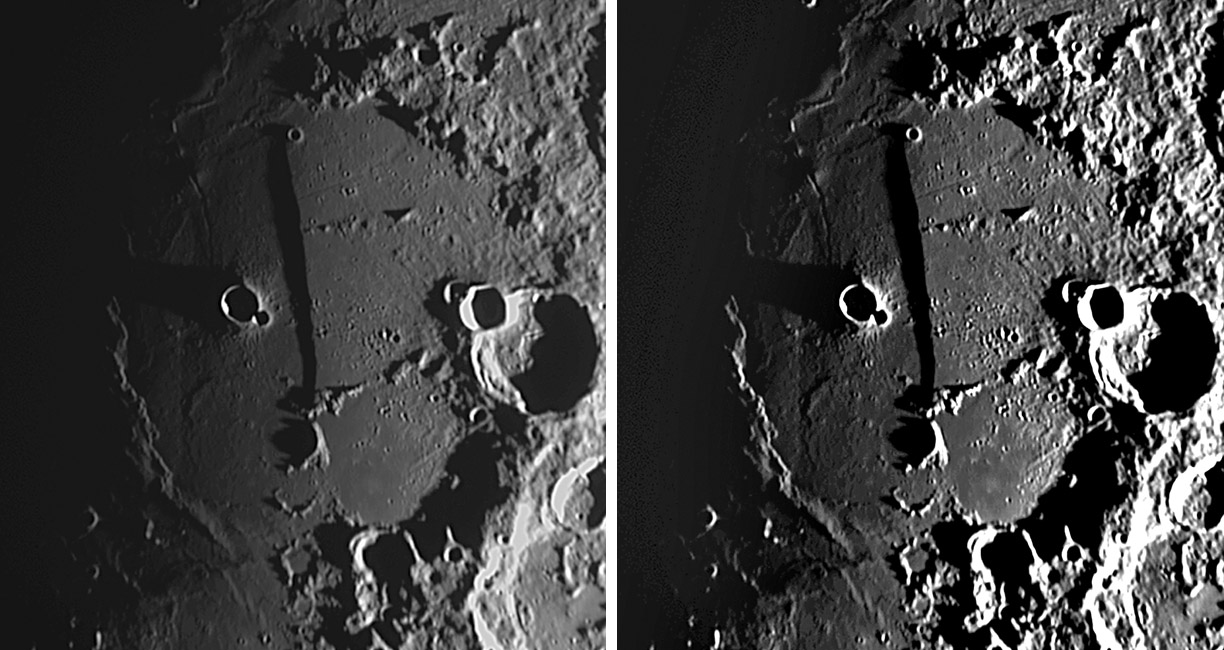 This is the most dramatic image of the Straight Wall that I've ever seen. Jim's diligence at imaging as close to the terminator as possible has reaped great rewards with this image. The long shadow cast by the fault will be analyzed by the GRL team to study the details of the fault height, but it clearly is higher to the north. There are many subtle topographic features exposed in this image. (1) The rille on the northeast side of the fault and nearly at right angles to it starts with two shallow crater-like depressions and then narrows as it approaches the fault; there is no evidence that it continued beyond the scarp. (2) Both of the domes at the north end of the Birt Rille cast shadows, hopefully allowing their heights to be determined. (3) The straight and narrow crease southwest of Birt is well seen, but still mysterious in origin. (4) The line of hills from the south end of the fault to Thebit, and the matching line to the north still seem like they could be the inner ring of a two-ring basin whose rim is the 200 km half-ghost crater (Ancient Thebit) that contains the Straight Wall. (5) The bottom right portion of Ancient Thebit has less roughness than other nearby areas, suggesting that it is a more recent lava flow, perhaps occurring post-Thebit whose ejecta is less visible. (6) Finally, the really interesting interpretation suggested by this image: Were Birt and Birt A formed by a simultaneous oblique impact? The ejecta from Birt seems to be concentrated to the north and south, like that of Messier. This would imply that the projectile came from the east or west. A low Sun view with sunset illumination would confirm the distribution of Birt's ejecta.

Technical Details
Feb. 14, 2008. TMB 8" F/9 @ F/27
This image was acquired with the aid of Alexandria, Jim's 4 year old neighbor who is becoming mesmerized with the Moon.