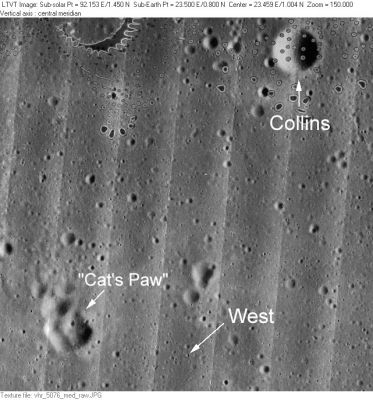 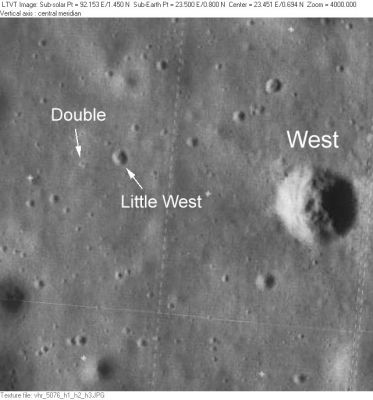 The view on the left, taken by the medium resolution camera onboard Lunar Orbiter V, shows the location of the IAU-named crater West in relation to Collins and the informally named "Cat's Paw", both of which can, when conditions are just right, be seen though amateur telescopes from Earth. The pair of roughly 1-km diameter craters to the east of the "Cat's Paw" can also be barely seen on the best amateur photos.

The view on the right, taken at the same instant with Lunar Orbiter V's high resolution camera, shows West in more detail. The crater names "Double" and "Little West" are informal names that appear on the Site Traverses Map of the Apollo 11 Landing Site. In its final approach (coming in from the right), the lunar module flew just north of West, passing directly over "Little West" (called "East" on some NASA maps), and finally touching down just short of "Double" crater. Some parts of the rims of the "Cat's Paw" craters can reportedly be seen from this location.

LPOD Photo Gallery Lunar Orbiter Images Apollo Images
Is craterlet West' visible on Apollo 11's LEVA photographs made by Neil Armstrong? (photographs made while Edwin Aldrin descended LM Eagles ladder) (something of a shadowed eastern inner slope of a crater is visible in the distance, looking eastward under the LM's Descent Stage, sans the disturbing glare of the morning sun's light). - DannyCaes Oct 18, 2015 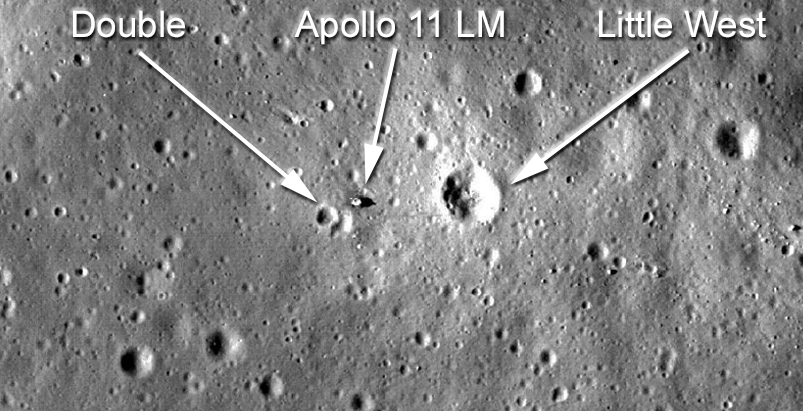