From The Moon
Revision as of 20:00, 16 April 2018 by Api (talk | contribs)
(diff) ← Older revision | Latest revision (diff) | Newer revision → (diff)
Jump to: navigation, search
In the LPOD of December 1, 2007 I proposed that a group of imagers could contribute a consistent set of images that would become the core of a new Observer's Photographic Atlas of the Moon. This page is a forum to collect ideas and comments about the need for a new atlas, its desired characteristics, and other relevant topics. This is a wiki so its easy for you to add text to this page or to use the "discussion" tab above for more lengthy comments. Jump in! Chuck Wood

This page might be the spark which ignited the creation of the wonderful and handy 21st Century Atlas of the Moon by C.A.Wood and M.Collins.- DannyCaes Sep 30, 2013

1: Is there a need for a new photographic lunar atlas?

Yes. The currently available ones (table below) all were created to satisfy their authors, but they don't work for me for the reasons listed as comments. In the table "Sections" is the number of pieces the Moon is divided into, and "Pages" is the number of pages showing the Moon (multiple illumination views). "Names" means that the atlas identifies named craters, and "Letters" means it also shows lettered craters. "Copernicus" is the diameter in mm of Copernicus to indicate scale. Rükl's non-photographic Lunar Atlas is added for comparison.
Table to be completed/added to.

In reviewing these atlases it seems my greatest problems with them are scale and resolution - half have too small of scale (image size) and others are too large, and resolutions are too low for most. The last four divide the Moon into too many sections - especially awkward at the telescope. Hatfield seems the best in terms of image (except for resolution), and Legault & Brunier is best for layout (except too big).

2: What are desired characteristics of a new observer's photographic atlas?

More ideas are in the August 4 LPOD.

Other Ideas?
I would imagine that the central sections of the atlas would produce good images which show shadow relief views of the surface features. What about the areas towards the limb. I should imagine that these areas would need to be of multiple images over a number of days as the terminator crosses the Moon? Dave Storey. 3rd Dec. 2007

Are you interested in acquiring suitable images of the quality needed of these areas - or whatever ones are decided on?
Certainly would like to do some areas but I do lack the equipment that some of LPOD observers use and they do produce excellent images.
Dave Storey. 3rd. December 2007 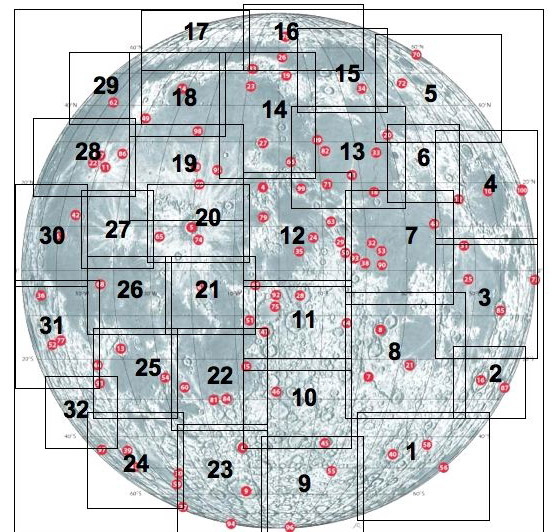