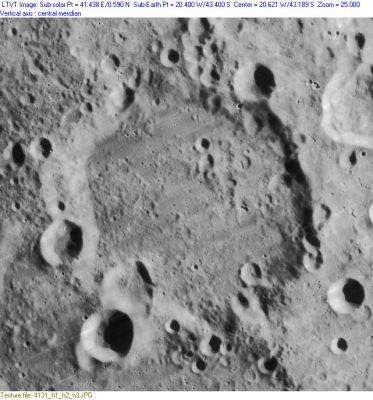 (IAU Directions) WILHELM I.--A large irregular formation, about 50 miles across, S.W. of Heinsius, with walls varying very considerably in height, rising more than 11,000 feet on the W., but only about 7,000 feet on the opposite side. The border is everywhere crowded with depressions, large and small. Three ring-plains, not less than 6 miles in diameter, stand upon the S. wall, the most easterly overlapping its shallower neighbour on the W., which projects beyond the wall on to the floor. The interior has a very rugged and uneven surface, upon the N. side of which are two very distinct craters, and a short crater-row on the E. of them. It is traversed from E. to W. by three bright streaks from Tycho, two on the N. being very prominent under a high light.