Theiler - in the western part of Mare Marginis 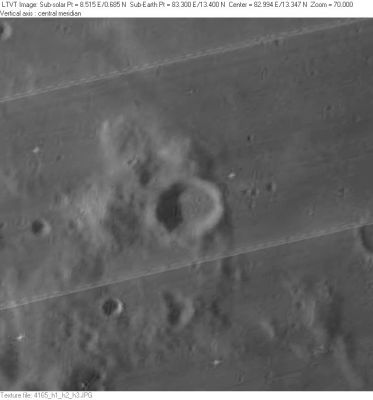 LPOD Photo Gallery Lunar Orbiter Images Apollo Images
- Theiler was perhaps photographed during the missions of Apollo 10 and Apollo 17. I have to explore a number of oblique north-looking Hasselblad frames of Apollo 10 (of the Neper region) and several of Apollo 17's mapping/metric and panoramic frames, made with the Fairchild and ITEK cameras aboard the SIM-bay of CSM America.- DannyCaes Jul 30, 2010
- On Apollo 17's orbital panoramic ITEK-camera frames AS17-P-2169 and AS17-P-2174 it (Theiler) is noticeable as a high-albedo ("sunflower-like") crater which is located rightward of both frames's centres (scroll to the right). Note also the curious looking surroundings of Theiler (a field of swirls which is part of the gigantic swirlfield at Mare Marginis).
- Research Apollo photography: Danny Caes