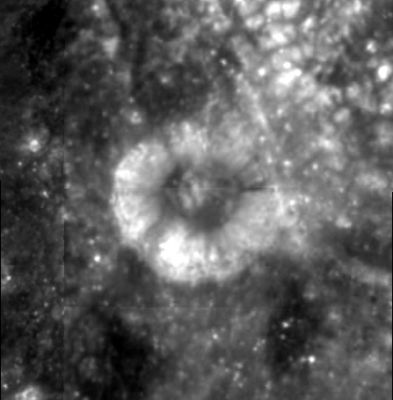 LPOD Photo Gallery Lunar Orbiter Images Apollo Images
- To get orbital Apollo photographs of Sherrington, one should explore the page of the larger crater Langemak, because Sherrington is located at the southwestern part of Langemak's rim.- DannyCaes Jun 30, 2010
- Apollo 8's photographs of Langemak and Sherrington are not mentioned in the Apollo Image Atlas of the LPI. David Woods and colleagues of the Apollo 8 Flight Journal detected many, and also a photograph of Sherrington: AS08-12-2138.
- Sherrington was also captured on Apollo 17's orbital panoramic ITEK-camera frame AS17-P-2805 (near the frame's right margin).
Research orbital Apollo 17 photography: Danny Caes

Sir Charles Scott Sherrington (November 27, 1857 - March 4, 1952) was a British scientist known for his contributions to physiology and neuroscience. He shared the 1932 Nobel Prize in Physiology or Medicine with Edgar Douglas Adrian "for their discoveries regarding the functions of neurons". Sherrington is also known for his study of the synapse, a word which he coined for the then-theoretical connecting point of neurons. One of Sherrington's students, John Carew Eccles later won the Nobel Prize in 1963 for his work on the synapse.