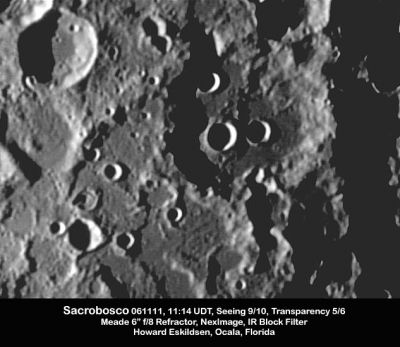 (IAU Directions) SACROBOSCO.--This is one of those extremely abnormal formations which are almost peculiar to certain regions in the fourth quadrant. It is about 50 miles in greatest diameter, and is enclosed by a rampart of unequal height, rising on the W. to 12,000 feet above the floor, but sinking in places to a very moderate altitude. On the N. its contour is, if possible, rendered still more irregular by the intrusion of a smaller ring-plain. On the N.W. side of the floor stands a very bright little crater and two others on the S. of the centre, each with central mountains.

Johannes de Sacrobosco or Sacro Bosco (John of Holywood, c. 1195 - c. 1256) was an English scholar and astronomer/astrologer who taught at the University of Paris and wrote the authoritative mediaeval astronomy text Tractatus de Sphaera.