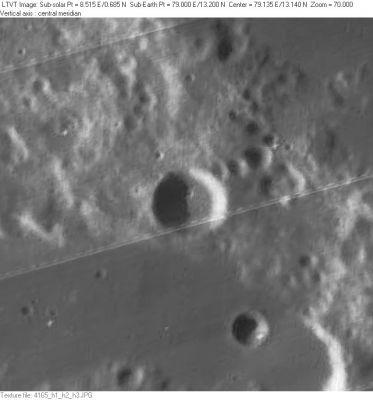 LPOD Photo Gallery Lunar Orbiter Images Apollo Images
A fully illuminated Sabatier was captured at (or very near) the central parts of Apollo 17's orbital ITEK-panoramic frames AS17-P-2179 and AS17-P-2184. In these frames, Sabatier is the crater with high-albedo inner slopes. The eastern (or "lower") part of Sabatier's rim is "touching" the lower margin of both frames.
Research: Danny Caes

Although the formation called Sabatier seems to be one of the most unknown craters on the whole of the moon's surface, its position could be located rather quickly because of the proximity of Lacus Risus Felis (the cluster of dark lakes which was never officially named by the IAU, but... received an unofficial and well-recognizable nickname by Charles Wood!).
Sabatier's location is very near the southern part of the "smiling mouth" of Lacus Risus Felis. Research: Danny Caes

Paul Sabatier (November 5, 1854 – August 14, 1941) was a French chemist. Sabatier greatly facilitated the industrial use of hydrogenation. In 1897, he discovered that the introduction of a trace of nickel as a catalyst facilitated the addition of hydrogen to molecules of carbon compounds. He won the Nobel Prize in Chemistry jointly with fellow Frenchman Victor Grignard in 1912.