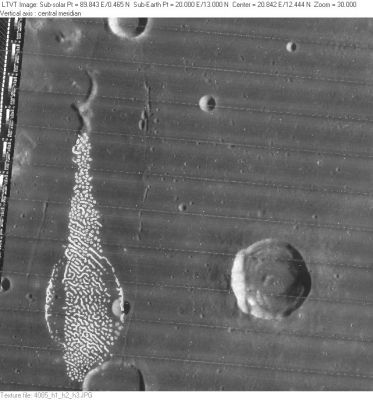 LO-IV-085 The two main rilles of Rimae Maclear are in the left part of this detail from a Lunar Orbiter frame, unfortunately marred by a fingerprint-like flaw in the on-board film development, which they straddle. In the System of Lunar Craters, the segment on the right, running from 12-km Al-Bakri (at the top margin) to 20-km Maclear (at the bottom margin) was known as Rima Maclear I; while the much shorter parallel segment to its west, about 28 km long and terminating near 5-km Ross C (shadowed crater on the lower left margin), was Rima Maclear II. The 24-km crater to the lower right of center is Ross. The other IAU-named features in this view are 6-km Tacquet C (midway between Ross and Al-Bakri) and 6-km Ross B (directly above Maclear.