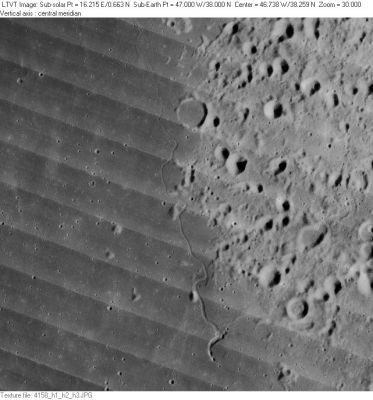 LO-IV-158H Rima Mairan extends vertically along the center of this image. The 10-km flooded crater at top center is not named, but several of the small ones in the field to the right are: Mairan C and F and Gruithuisen R and S. See the USGS-IAU Digital Atlas/Nomenclature Chart (PDF).

LPOD Photo Gallery Lunar Orbiter Images Apollo Images
- Apollo 15's orbital B-and-W Hasselblad AS15-95-12870 doesn't show Rima Sharp (as mentioned in the caption), it shows a northward looking oblique view of Rima Mairan.
- The last frames of Apollo 15's color-Hasselblad magazine 93-P show Rima Mairan as seen from an orbital location slightly southward of it (looking "up north", toward the northern horizon). Of these, AS15-93-12733 shows Rima Mairan near the centre of the frame, with the curious volcanic hillock Mairan T near the upper margin.
- Research orbital Apollo 15 photography: Danny Caes.

Three Rilles and a Strange Volcano