Reinhold - and Eddington (Reinhold B) northeast of it 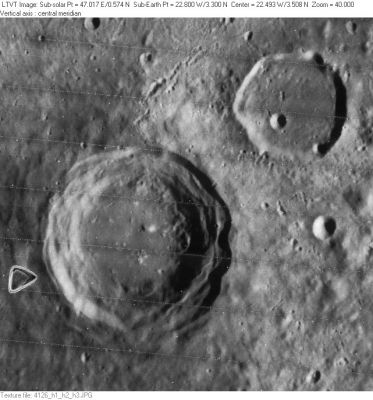 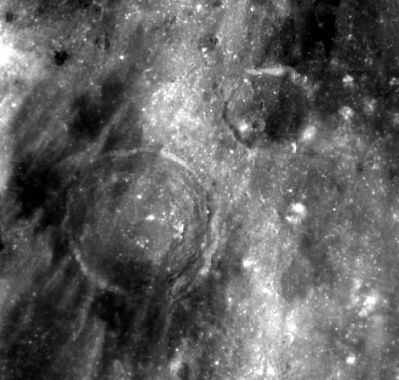 left: LO-IV-126H; right: Clementine
Reinhold is in the lower left, with 26-km Eddington (Reinhold B) to its upper right (northeast of it). On the floor of Reinhold B is the 4-km Reinhold A . Also visible, at center right, is Reinhold F. The triangular feature on the left of the Orbiter image is a defect in the development of the Lunar Orbiter film.
Eddington was one of the discontinued names from H.P.Wilkins and P.Moore (see their book The Moon). The recent versions of the Hallwag moonmap still show several examples of these discontinued names. Eddington is one of them.

LPOD Photo Gallery Lunar Orbiter Images Apollo Images (the LPI's orbital Apollo photographs of Reinhold A and B are online as "Rheinhold").
Apollo 12's AS12-47-6875 and the almost identical looking AS12-47-6876 are two of the most frequently reproduced orbital Hasselblads of Reinhold (foreground), Copernicus (near the curved horizon), and Reinhold B (Wilkins's "Eddington" between Reinhold and Copernicus). The curious keyhole-shaped double crater Fauth is also noticeable: a little bit to the "right" of Copernicus.
Research: Danny Caes

(IAU Directions) REINHOLD.--A prominent ring-plain, 31 miles in diameter, with a lofty border, rising at a peak on the E. to more than 9,000 feet above the floor. Its shape on the E. is clearly polygonal, the wall consisting of three rectilineal sections, and on the W. it is made up of two straight sections connected by a curved section. The inner slope includes a remarkably distinct and regular terrace, the W. portion of which is well seen when the interior is about half illuminated by the rising sun. At this phase also the great extent of the glacis on the S.E., and the deep wide gullies traversing it on the W. are observed to the best advantage. The central mountain, though of considerable size, is not prominent. Close to Reinhold on the N.E. stands a noteworthy little formation with a low and partially lineal wall, exhibiting a gap on the north. There is a distinct crater on the S. side of its floor.

3.8 Billion Years of History The Case of the Missing Peak