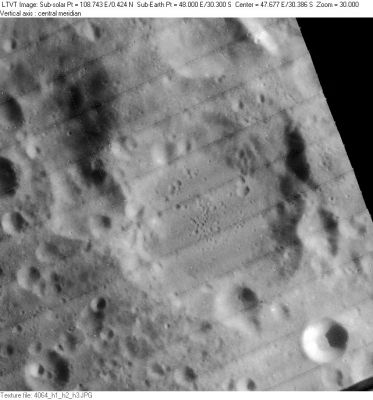 LO-IV-064 The dark area in the upper left is part of irregular 64-km Reichenbach T. The 15-km crater with the neatly tapering walls is Reichenbach G. Several other lettered craters named after Reichenbach are also wholly or partially visible in this frame.

(IAU Directions) REICHENBACH.--A very abnormally-shaped ring-plain, about 30 miles in diameter, with a rampart nearly 12,000 feet high. The border is broken on the E., S., and W. by craters and depressions, and on the N. is flanked by two overlapping ring-plains, a and b. On the S.E. lies a magnificent serpentine valley, fully 100 miles in length and about 12 miles in breadth at the N. end, but gradually diminishing as it runs southwards, till it reaches a depression N. of Rheita, where it terminates: here is scarcely more than 4 miles wide.

Georg von Reichenbach (August 24, 1771 - May 21, 1826) was a German astronomical instrument maker. Reichenbach's principal merit was that he introduced into observatories the meridian or transit circle, combining the transit instrument and the mural circle into one instrument.

Reichenbach A was called Steavenson by Wilkins and Moore, but the IAU did not accept that name.