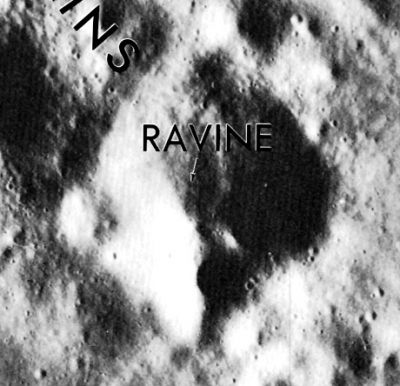 LPOD Photo Gallery Lunar Orbiter Images Apollo Images
Note: there are several photographs made by both CDR John Young and LMP Charles Duke (of Apollo 16) which show crater Ravine at the base of the southern slopes of Smoky Mountain. A survey of these photographs (to create an online list for this page) is planned. - DannyCaes Mar 18, 2012
- AS16-110-17959 shows Ravine near the central part of the horizon. See also the extreme Hi-Res scan of that photograph: AS16-110-17959HR
Research Danny Caes