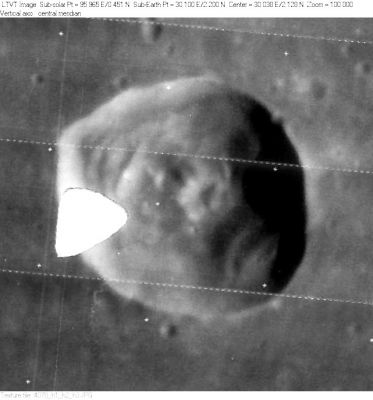 LO-IV-078H The white triangle is a defect in the Lunar Orbiter film.

(IAU Directions) MASKELYNE.--A regular ring-plain, 19 miles in diameter, standing almost isolated in the Mare Tranquillitatis. The floor, which includes a central mountain, is depressed some 3,000 feet below the surrounding surface. There are prominent terraces on the inner slope of the walls. Schmidt shows no craters upon them, but Madler draws a small one on the W., the existence of which I can confirm.