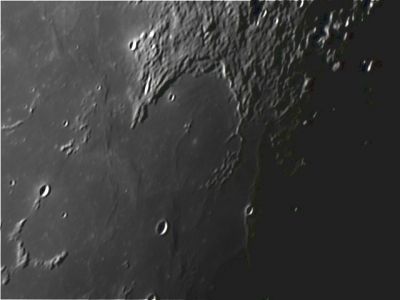 Dave Storey. The Isle of Man Observatory; south up

LPOD Photo Gallery Lunar Orbiter Images Apollo Images
- Letronne A, a small high-albedo crater east-southeast of Letronne itself, is an interesting target to investigate reflected light on the shadowed eastern inner slopes of it (of this crater), this via orbital photographs made by Apollo 16's mapping/metric Fairchild camera.
- The Arizona State University's zoomify-scan of Fairchild frame AS16-M-2994 shows Letronne and also the small Letronne A near the frame's lower right corner, photographed during the local post sunrise hours. Note the reflected light on Letronne A's shadowed eastern inner slopes, after maximum zooming-in at this crater!
- Research orbital Apollo 16 photography: Danny Caes.

(IAU Directions) LETRONNE.--A magnificent bay or inflexion in the coast-line of the Oceanus Procellarum, N.N.W. of Gassendi, presenting an opening towards the N. of nearly 50 miles, and bounded on the S. and S.E. by the lofty Gassendi highlands. Its border on the E., about 3,000 feet high, is crowned with innumerable small depressions. The interior includes four bright little mountains, nearly central (three of them forming a triangle), a bright crater on the E. side, and several minor elevations and ridges. On the plain N. of the bay, is a large bright crater, from which a fine curved ridge runs to the central mountains. If Letronne is observed under oblique illumination, the low mounds and ridges on the Mare outside impress one with the idea that they represent the remains of a once complete N. wall.

Jean Antoine Letronne (25 January 1787 – 14 December 1848) was a French archaeologist. He became a student in the College de France, where it is said he used to exercise his already strongly developed critical faculty by correcting old translations of Greek authors and afterwards comparing the results with the latest and most approved editions. He published extensively on the history of the Greeks and Egyptians.