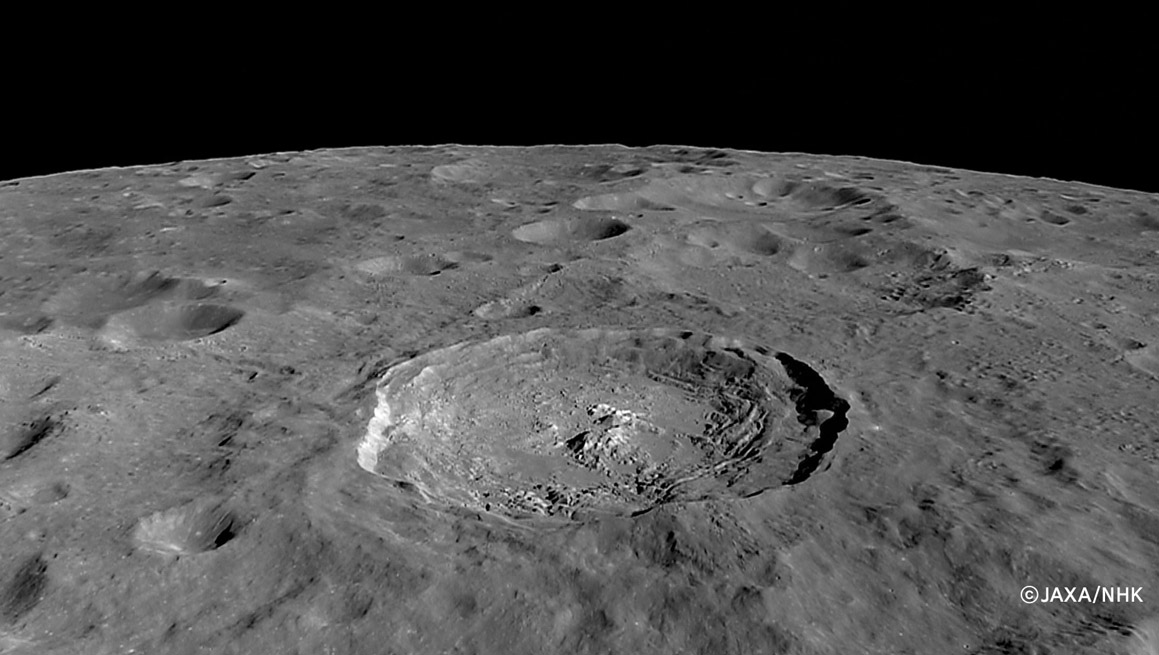 image by HD-TV on Kaguya, NHK

The Japan Broadcasting Corporation (NHK) has just made a major release of high resolution videos and still images from their HD-TV camera on the Kaguya/Selene lunar orbiter. The locations of some stills from the videos are indicated on Clementine mosaics of the near side and the far side using delightful pulsating blue circles. Clicking one on the northern hemisphere farside brings up this magnificent image of one of the youngest large craters on the Moon - Jackson. This crater is famous for its asymmetric pattern or rays with a broad zone of avoidance to the northwest. It was formed by an oblique impact which came from the northwest, and this image shows that the inner rim on the southeast side is broader than normal, and apparently cut by some sort of unusual cracks. The Clementine high Sun view reveals a dark collar, like Tycho, of impact melt, that indicates a very young age. The floor of Jackson has ponds of smooth material - almost certainly impact melts. This TV image is by far the best image in existence of Jackson and it reveals many previously unknown details. Yahoo!

(1) Hooray indeed and a resounding 'yipee' for good measure. Stunning image this... especially when it shows such a clear contrast between Jacksons 'pristine' / sharp rim and the smooth, 'weathered' surrounding impacts. Can anyone give a 'guesstimate' as to the youthfullness of Jackson or is 'Copernican' the closest we can surmise? (And Chuck, in reference to an earlier question of mine, it appears (on the Clementine image from your NHK link) that the western border of Jacksons' area-of-avoidance is also curved like Samir's yet the northeastern border is straight... curious. I'm going to have to look into this more closely)
Mark

(2) After looking at all the impact craters and basins like the one above, I have been wondering if this bombardment has affected the mass of the Moon over time. Would the Moon be larger and heavier as a result of all the impacts, or would there be a net loss of material due to rocky debris being blown off the surface?

And then there is a question about the cumulative effect of all the micrometeorites raining down on the Moon over billions of years. I read that it is an estimated 10 metric tons per day. Would this have a significant impact on the Moon's mass and gravity?

(3) Bill... I have often thought this myself. At school we were taught that the Earth accumulates around 100 metric tonnes of material each year but this value has been recently upscaled to around 50,000 metric tonnes per year (!), the majority of which comprises small grains and dust, rather than larger impactors. This is a small figure when compared to the mass of the Earth but has increased the mass of the Earth over time (especially when considering that the value of accumulated material must be decreasing over the time). With the moon being significantly smaller it is less efficient at acquiring this material (my gut feeling is that 10 metric tonne per day is a little light) but it goes to show that just because we are around 4.5 billion years after the formation of the solar sytem we shouldn't think that the planet-building process is over; vastly reduced yes but not over.
I think that the amount of material lost to space from any impacts would be significantly less than the total mass of the impactor but I haven't access to any data on this. For the Earth though it doesn't matter how many tonnes of metal and plastic we hurl into the solar system forever destined never to return, we are still getting more massive each year ;)... especially as small impactors won't throw material very far.
Mark