NOT WHAT YOU THINK 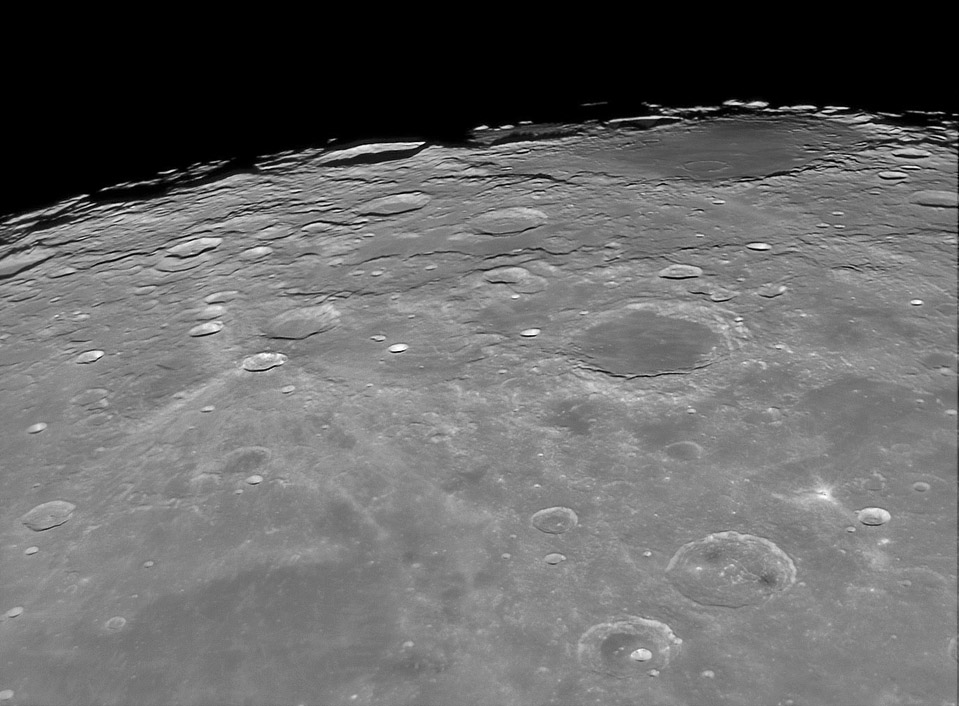 Thales, west-northwest of Mare Humboldtianum, is a crater formed by an oblique impact. Tom's image shows the strong bright ray extending to the bottom left, and a harder to see mirror-image one crosses over the three-some Strabo L, B and N. Faint rays are visible extending out toward Mare Frigoris and on Endymion. The full extent of the rays is most easily seen in a Clementine color ratio image,which strikingly reveals the zone of avoidance to the north, meaning the crater-forming projectile came from that direction, and was traveling towards the south. Do you see the second oblique impact crater in Tom's image? It is the bright little unlettered crater east of Atlas. In this case the zone of avoidance is to the south-southeast. Surprisingly, there is no professional list of oblique impact craters, so we started one at the Moon Wiki. Please add to the list - how many oblique impact craters are on the Moon?

(1) Three questions: (a) The oblique impactor Wiki page says that elliptical crater shapes only become apparent when the impact is below 15°. Do unsymmetrical ray patterns first become evident at about the same angle or at some other angle? (the little bright 3-km diameter crater mentioned here doesn't look significantly out-of-round when viewed from overhead) (b) Are there any other clues for detecting oblique impacts near the poles where the Sun is never high enough to show rays to advantage? (c) Are impacts from secondary ejecta, many of which must be at low angles, in a separate category?

As to the number of oblique impact craters, although there may be no comprehensive list, surely Öpik (or one of the other scientists) must have worked out the mathematical details of the expected distribution of impact angles in various scenarios? For example, if projectiles hit the Moon equally from all angles, the fraction striking below 15° would be the same as the fraction of a hemisphere within that angle of the circumference, which, I believe, is the sine of the angle, or about 26%. On the other hand, if the projectiles all originated from material circulating in the Moon's equatorial plane, the Moon's spin would tend to distribute their impact angles equally in the east-west direction, but not north-south. In that scenario, in the equatorial zone we might expect 15/90 = 17% to be below 15°, with the fraction increasing towards the poles (where all impacts would necessarily be at a very low angle). Another signature of impacts originating exclusively in the equatorial plane is that the axis of all impacts would be in the east-west direction (something that doesn't seem to be the case).

In any event, it would seem to me that about 1 in 5 (or more) of all primary impacts from space must have been at angles below 15°. This applies to tiny (and "micro") craters as well as large ones, so the total number of oblique impacts must be very large, whether they can be recognized as such today or not.

P.S.: Ernst Öpik is probably just one of many significant Moon/crater-related scientists who -- while many far lesser lights have been honored -- not only haven't been recognized by IAU-named craters on the Moon, but don't seem even to be on the waiting list.


(2) Looking at the Oblique Impact Craters page in Moon Wikispaces, I see no mention of the most obvious of oblique impact craters on the Moon; that of TYCHO crater. The ejecta stretches right across the full face of the Moon, predominantly in a north-easterly direction (implying the impactor's direction was from the south-west), and shows the typical nonsymmetrical ray-pattern.
Or am I wrong about this?


(3) On reflection, I see that my reasoning about the number of low angle impacts is not really sound. If one thinks about a flat surface (a "unit area") rotating relative to a source of projectiles, when it tips enough to make the impact angle very small, it will simultaneously reduce the cross-section it presents to the source, making the chance of getting hit at that angle smaller -- much smaller at very small angles. So my estimates of the fraction of impacts below 15° must need to be revised downwards considerably. But someone surely has worked out the correct numbers, and given the countless craters on the Moon a good many of them must be oblique no matter how small the expected fraction is.