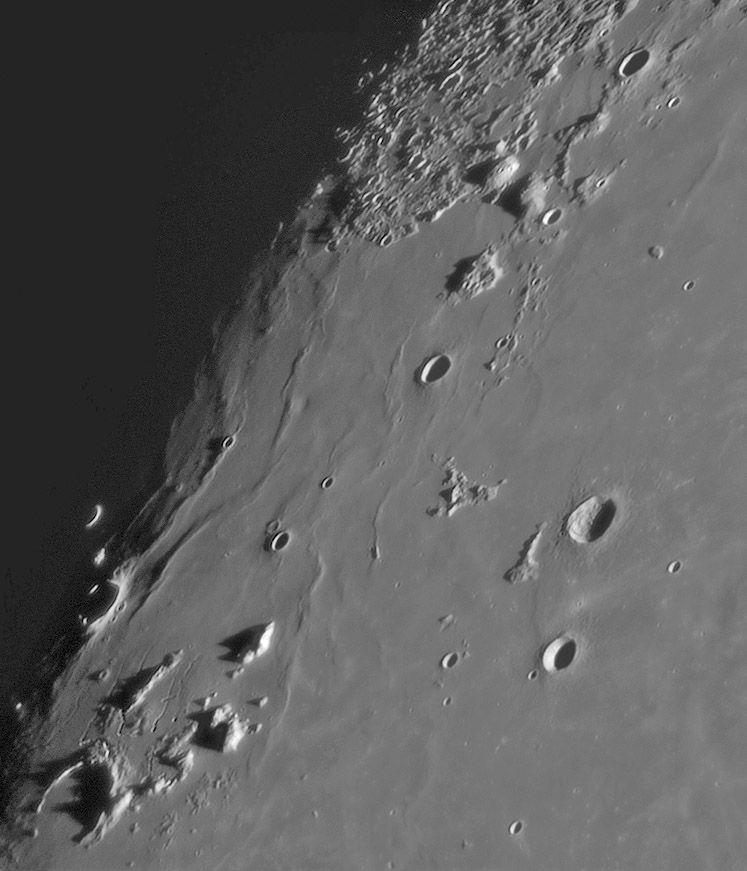 What makes mountains on the Moon? Many named ones are segments of basin rims, for example, either the continuous range of the Apennines and the Altai, or the aligned peaks of the Leibnitz. Each impact crater also makes a local circular range of mountains. And central peaks are also mountains. So what is the origin of the various mountains shown in this western edge of Mare Imbrium? At bottom left are the Harbinger Mountains just northeast of Prinz crater. These mountains are enigmatic. They are not the rim of any detectable crater and they seem to be in between two rings of the Imbrium Basin. I think they have been uplifted, as has perhaps the Aristarchus Plateau, but why just these peaks. Near the crater Delisle are the informally named Baby (real name Mons Delisle) and Skull. Both are residual hills with short curved arcs - suggesting that they might be parts of otherwise destroyed craters. Why did they survive if the rest of the craters were buried by Imbrium lavas? To the southwest of these mountains are two small hills. One is along a mare ridge and thus seems to be associated with that. Many mare ridges are shallow thrust faults (one piece of crust moves up and horizontally over an adjacent piece), but again, why was this piece special - the rest of the ridges are lower and less steep? A little hill to the south is adjacent to the 6 km depression named Fedorov. This is not an impact crater, but looks like it may be the summit crater of a very low volcanic dome. But what is the little hill? Moving north, the next hills are east of the crater Gruithuisen. There is little evidence as to their origin so we can speculate that they are ejecta either from the Imbrium Basin or the Sinus Iridum crater, as is the hilly material at top left. The two rounded hills Gruithuisen Gamma and Delta are actually some mountains whose origin we think we understand - they are volcanic domes, perhaps made of lavas more viscous than those in the mare and thus steeper sided than mare domes.

COMMENTS
To post comments regarding this LPOD you need to first register for the wiki by clicking the "Join" icon in the upper right corner of the screen, and wait for your membership to be approved. Once registered, you may still need to "Sign In" (again at the top of the screen) to remove the "Protected" icon from the top of the LPOD page. Once you don't see a "Protected" icon, please click here and enter your comment in the space below. Please do not edit the LPOD itself!

(1) Wonderful photograph Stefan! You have captured the small guitar- or bottle-shaped depression between Fedorov and Mons Delisle! It was also observed and photographed by the orbiting crew of Apollo 15. Several orbital Hasselblad photographs were made of that "Guitar/ Bottle". As far as I know, there's no official IAU-name for it.
Let's call it the "GUITARBOTTLE", shall we?

(2) Danny--I can find Mons Delisle on my Sky & Telescope Field Map of the Moon, but I can't locate Fedorov. There is a crater just to the south of Mons Delisle that is identified as "Diophantus" on the field map. Is the "Guitarbottle" located to the north of that crater?

(3) Bill, the Guitar-Bottle shaped depression is really very small! It was not depicted by Antonin Rukl on Chart 19 of his Atlas of the Moon. But... it was VERY vaguely depicted on Chart 25 of the Times Atlas of the Moon (without that typical Guitar- or Bottle-shape). The exact location (read: the pinpoint coordinates of it) is/are: 28°40' North/ 36°30' West (say: west-northwest of Diophantus, and just northward of Diophantus A, which is nowadays officially known as Artsimovich).
The Times Atlas of the Moon is still a good source to explore the moon's near side, although one has to write all the IAU's recent nomenclature (the post-Apollo nomenclature) with Rotring-pen on the charts (which I did several years ago!).
It is rather strange why that Guitar/Bottle-shaped depression was not included in Farouk El-Baz's NASA-SP362 Apollo Over The Moon (Chapter 7; Unusual Features). Perhaps it's time to write some sort of "appendix" to NASA-SP362 ? (an appendix to Chapter 7).

4. The Fedorov & Guitar/bottle features are available in VMA V4.0. Just search for Fedorov, get the photos and there you are. Very subtle in Stefan's supurb photo!
--
Mel Richardson